This is certainly a bumper year for All Blacks fans – with the All Blacks to play five Test matches at home in this year's Rugby Championship, as well as an extra Bledisloe Cup Test.

The All Blacks play the opening Bledisloe Cup Test presented by Steinlager, before the start of the Rugby Championship, at Eden Park, Auckland, on Saturday 7 August.

The second Bledisloe Test is at Optus Stadium, Perth on Saturday 21 August, with the third back home at Sky Stadium, Wellington the following Saturday 28 August.

September will then see four Tests in a row for the All Blacks, with back-to-back Tests against Argentina, at Eden Park on Saturday 11 September (a “home” game for the Pumas) and Sky Stadium, Wellington on Saturday 18 September.

The first of the back-to-back Tests against South Africa at Forsyth Barr Stadium, Dunedin on Saturday 25 September will be an extra special occasion – it will be the 100th Test match between the two famous foes, played in the 100th year anniversary of New Zealand and South Africa's rich rugby history, in the same city as that first ever Test. (Played at Carisbrook on 13 August 1921, the All Blacks won 13-5).

The All Blacks' final Rugby Championship Test against South Africa will be at Eden Park on Saturday 2 October (a “home game” for the Springboks).

All Blacks Hospitality is pleased to announce a full range of packages ideal for client and guest hosting, to every home All Blacks test match this year.

All Blacks Hospitality can also help you put together a bespoke experience around a match, so for further inquiries contact:

Located in an exclusive lounge called the Centenary Lounge situated in the South Stand which overlooks the playing field.  This All Blacks Hospitality product is very popular informal stand-up offering with bar leaners in a semi-formal environment, with great views over the field and dedicated seating directly outside the lounge and hospitality throughout the match.

- Pre, during and post-match hospitality service in a dedicated lounge looking over the field;

- Reserved Category A match ticket directly outside the lounge;

- Grazing finger food style menu served over the duration of the hospitality;

- Entertainment including Master of Ceremonies, guest speakers and musician;

- Access to your exclusive Boot Party®, including your own personalised number plate;

- Reserved category B match ticket in the North Stand;

PRICE QUOTED IS FOR 15 PAX PER BOOT

The Players Club is the perfect place to host clients and guests who love the camaraderie and sociability associated with international rugby.  Share the fun and excitement in this premium, sports bar like environment with bar leaners and ensure you don't miss out on a great way to enjoy All Blacks® rugby.

This is a semi-formal, relaxed hospitality package in a stand-up environment.  Reserved tickets will ensure you a great spot to watch the match from directly outside the lounge.  Food, beverage and a full programme of entertainment is also included pre, during and post-match in the exclusive Players Club in the Auckland Lounge of the West Stand.  The perfect position to see those up close corner tries!

- Pre, during and post-match hospitality in an exclusive venue overlooking the ground;

A dedicated hospitality facility uniquely and exclusively developed for All Blacks® Hospitality. The Platinum Club situated in the Aotearoa Room (Previously called Hall of Legends) will provide you and your guests with a seated, formal hospitality experience combined with either a choice of a Category A + or Category A match ticket in the North Stand.  This hospitality package will provide the very best hospitality and entertainment pre-match, and again post-match, in an exclusive indoor venue situated directly below your match allocated seating in the North Stand.  Approximately a 1 min walk to your match seating via an internal set of stairs out onto the North Stand concourse.

- Pre and post-match hospitality in the Aotearoa Room onsite at Eden Park in the North Stand;

- Reserved Category A+ or Category A match ticket;

SEATED TABLES OF UP TO 10 PAX

The Chairman's Suite is a unique private suite for 34 people which allows you to host guests in your own area right in front of  all the action of the West Stand corner with your dedicated private seats out the front.  Great for all those close-up goal-line tries!

- Reserved match seating directly outside the corporate box with cordons from the general public;

PRICE QUOTED IS FOR 34 PAX

For all true rugby fans, the Rugby Club is the place to be. Affordable, fun, rowdy and raucous, this relaxed, informal package provides the perfect solution for fans looking to secure tickets to some of the biggest rugby matches.

This is an informal, relaxed hospitality package in a stand-up environment with bar leaners.  Category D tickets in the Upper West Stand will ensure you a great spot to watch the match from.  Food, beverage and a full programme of entertainment is also included pre and post-match in the Bert Sutcliffe Pavilion on the Outer Oval of Eden Park. Approximately a 3 min walk to your match seating at the back of the Western concourse. 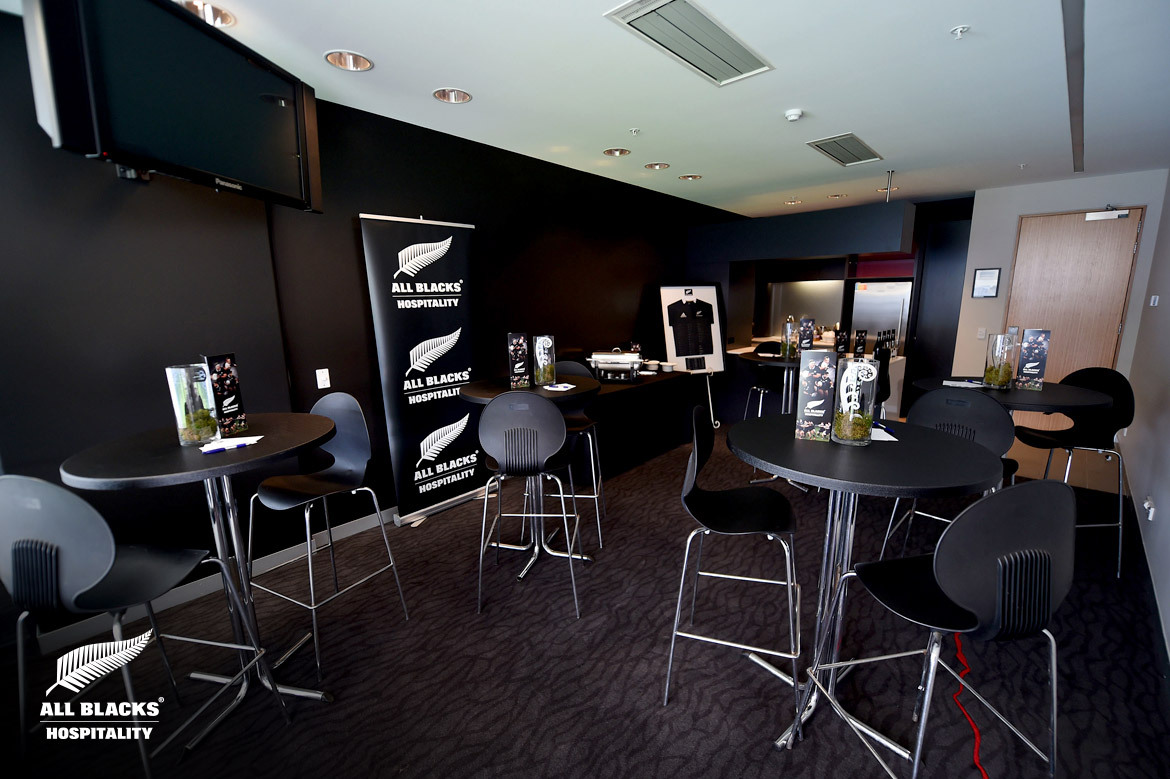 The traditional corporate suite hosting experience is available for you and your guests at this test match.  Experience the game from the comfort of your own private suite overlooking the field with dedicated Category A balcony seating.  All Suites are fully inclusive of food and beverage.  A unique opportunity to host in an exclusive environment for this All Blacks Test Match.

- Pre, during and post-match hospitality service in a dedicated suite for 20 persons;

- Reserved Category A match ticket directly outside the suite;

Be part of the fun and festivities, soak up the atmosphere of this great event, all while enjoying hospitality in your own dedicated seat.  Located in a prime position overlooking the ground from the Upper West Stand in Category D tickets, this is an affordable yet fun way to enjoy the rugby with your guests.  A great view of the newly added huge LED screen for all the replay action.

- Dedicated IN-SEAT hospitality in a ticketed area for all like-minded guests to enjoy the rugby from;

- Reserved category D match ticket in the centre of the Upper West Stand with great views over the field;

- All Blacks Hospitality commemorative chillibag provided to you in your seat which includes snacks, main meal voucher, cheeseboard, x 1 bottle of water, x 4 beverage vouchers - a choice of wine, beer or softs (vouchers for the hot main meal and beverage selections redeemable at a dedicated All Blacks Hospitality branded In-seat station at the entry to your seating block on the concourse of the West Stand);

- Commemorative All Blacks Hospitality lanyard, chillibag & disposable poncho - all of which you can keep.

* Note this package does not include access to any venue lounges pre, during or post the match. 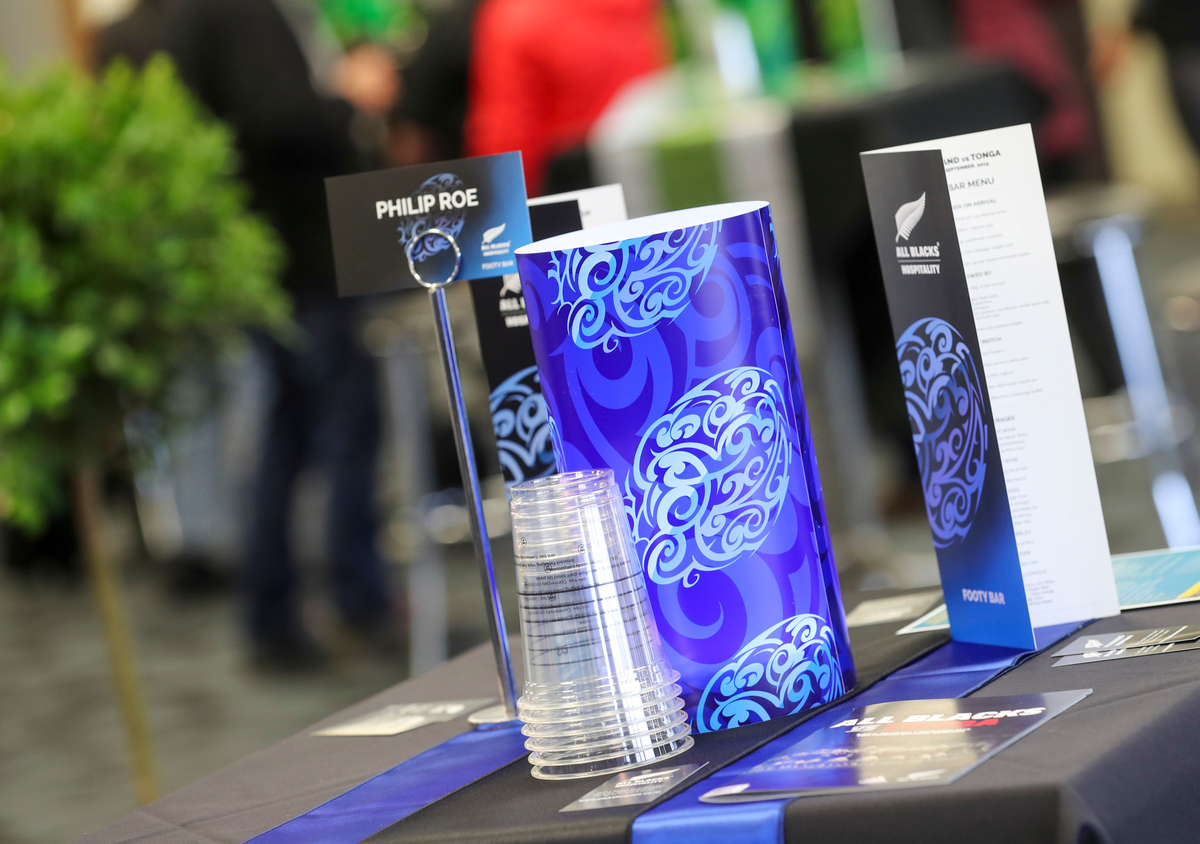 The Footy Bar is the perfect place to host clients and guests who love the camaraderie and sociability associated with international rugby.  Share the fun and excitement in this premium, sports bar-like environment with bar leaners and ensure you don't miss out on a great way to enjoy All Blacks® rugby.

This is a semi-formal, relaxed hospitality package in a stand-up environment.  Reserved tickets will ensure you a great spot to watch the match from in Category B Tickets of the North Stand.  Food, beverage and a full programme of entertainment is also included pre and post-match in the Heartland Lounge (previously called Museum) which is situated below your seats in the North Stand.

- Pre and post-match hospitality in the Heartland Lounge - please note the venue is closed during the match;

- Reserved  Category B match ticket within the North Stand directly above the venue;